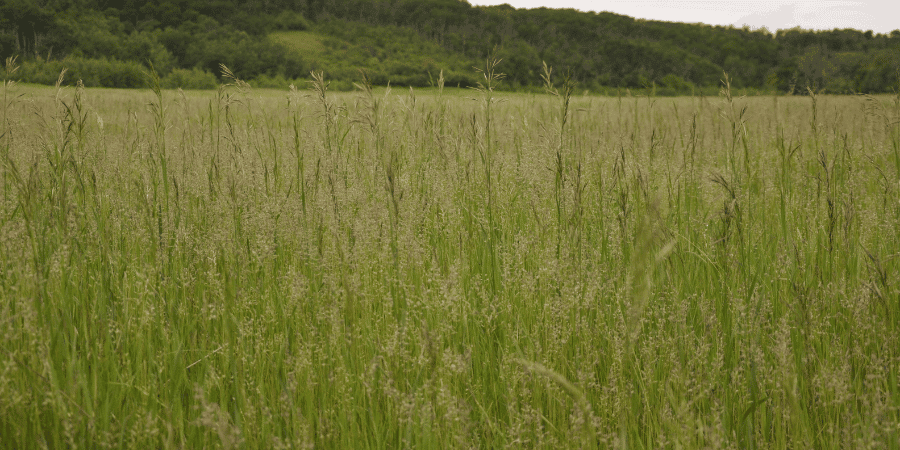 Paul Mcintosh, owner of Mcintosh Farm in Lac du Bonnet, admits there were some anxious moments on his farm during the summer of 2021. Aside from the odd sprinkle, the region received no significant rainfall between June 12 and Aug. 12 — he can’t recall many summers as dry as the one that just passed.

Despite such a challenging start to the season, Mcintosh enjoyed a better-than-expected harvest. While it was a so-so year for some of the other crops he grew, his farm enjoyed the best season on record for perennial ryegrass, producing more than 1,500 lbs per acre of ryegrass seed, which Mcintosh says made it the “star” of his operation for 2021.

As welcome as that success was, Mcintosh acknowledges it wasn’t exactly expected.

“We were very concerned [early on],” he recalls. “We had to make a decision on whether we just continue treating it as if it was raining because the crop still looked fine. I guess it was well rooted. We just continued as we normally would and thankfully it worked out.”

This past summer’s heat and dryness may have worked in his favour when it came to ryegrass production, Mcintosh says. The dry conditions meant his crop was clean and healthy and he didn’t have to deal with any serious fungus or insect pressures, while forest fires and their resulting smoke meant his ryegrass wasn’t subjected to the full intensity of the summer sun and was able to stay upright without any noticeable wilting.

“I’m pretty sure if it hadn’t been for the smoke we would have been [in trouble],” he says.

“I didn’t think at first it was going to be as good [a crop] as it was…but it never really stopped growing and it never really suffered any damage from the heat. It was green right up until the time we swathed it so I was fairly confident we would have at least an average crop, but it ended up being above average and I was pleasantly surprised.”

Perennial ryegrass is hardly something new for Mcintosh. He’s been growing it on his farm for the past 25 years. One of the most significant changes he has witnessed in that time was the introduction of PARLAY™ plant growth regulator (PGR) 7 years ago. It decreases ryegrass plant height and reduces lodging which in turn helps make swathing and harvesting faster and easier.

“Perennial ryegrass tends to grow too tall for its own strength and then just fall over,” Mcintosh explains. “We used to look at a crop of perennial ryegrass and think, OK, there’s 1,000 pounds out there. I hope I can get 700. The swathing was just so difficult at times. Now with the growth regulator you have a chance at getting it cut nicely into a windrow that’s easy to combine. It’s made a huge difference in harvesting the crop.”

One of the things Mcintosh likes most about growing perennial ryegrass is that it can typically be harvested early, taking some of the pressure off later in the season when there’s more going on. It’s also a crop that can be delivered and paid for early, which provides some early cash flow, and because it can be planted in the fall it gives a valuable head start on the next season.

A Match Made in Manitoba

Mcintosh has been working with BrettYoung Seed Production Specialist Allan Wilson for many years, and says he enjoys the close relationship he’s been able to develop over that time.

“I like it because…you have a reasonable expectation of price. You don’t have to do a lot of extra marketing…to make sure you’re getting a fair price…and not leaving a bunch of money on the table,” he says.

“You’ve also got the benefit of having the field rep and their expertise. Once you sign the contract it’s like you have another helping hand to grow [the crop] and that’s important .”

It was the guidance he received from his field rep that led Mcintosh to begin seeding perennial ryegrass as a companion crop with canola a few years back. It’s proven to be sound advice. His ryegrass has overwintered much better ever since, something he advises growers who may be considering incorporating it into their crop management plan to be aware of.

These days, most of Mcintosh’s time is spent repairing machinery, hauling grain and trying to get a handle on rising fertilizer prices for next season. Still, he does experience the occasional anxious moment.

*Parlay is a registered trademark of Syngenta Group Company