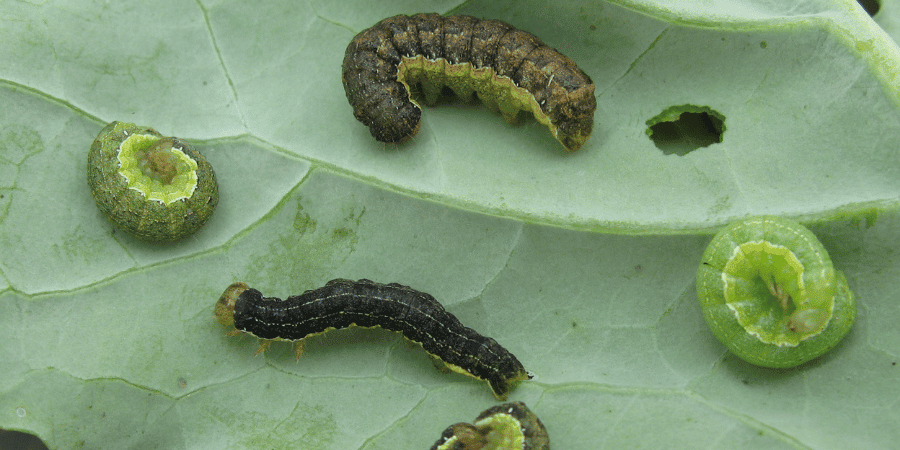 With the combination of extreme heat and drier conditions this year, keeping your canola protected from insects is critical. That’s why we sat down with John Gavloski, Entomologist for Manitoba Agriculture, Food and Resource Development, to talk about the insects you should be scouting for in your canola this summer, how to identify them and recommendations for dealing with them.

“The dry conditions are really contributing to pest susceptibility,” Gavloski says. “Lack of moisture is holding the crop back enough that a lot of the fields just aren’t as robust and vigorous as they normally would be.”

Canola growing under favorable moisture and temperature conditions can often compensate well for feeding on leaves, buds and flowers. Conditions that delay crop growth—like drought—can leave your fields more susceptible to insect damage. Gavloski recommends that you get to know several key insects that can be found in your canola, since some pests cause similar damage. With that in mind, Gavloski warns that there are four major insect threats to watch out for right now, as canola enters later growth stages:

“Grasshoppers are really keeping me busy this season,” says Gavloski, who thinks that they may be the top concern this year. “A lot of people aren’t really sure whether or not they should be controlling grasshoppers, so I have been providing a lot of guidance.”

When it comes to scouting grasshoppers, the goal is to reasonably estimate the levels in your field using a count per metre square.

“Grasshoppers are tricky to count,” Gavloski notes, “you can’t be too accurate; they’re jumping around within vegetation. Try to estimate approximate levels the best you can.”

Spraying may be warranted when populations exceed 7-to-12 grasshoppers per square metre in your field, though some judgement is required in the case of additional crop stresses—like drought.Sometimes border treatments are enough to manage grasshoppers sufficiently, especially before they become adults and can fly. When scouting, move deep enough into your field to account for the fact that grasshoppers may move inward as they mature and get their wings, especially if the vegetation where they initially developed becomes less abundant or is cut.

“In canola, there can often be an edge effect,” Gavloski says, “you don’t have to spray the whole field if this is the case.”

A potential problem for late summer, bertha armyworms are a type of climbing cutworm that spend their day on the soil, often under debris, and prefer to eat the leaves and occasionally pods of plants at night. Found in a variety of colours including green, black and brown, they can become a big issue in large numbers. But luckily, forecasts suggest growers may be getting a reprieve from these pests this year. “We monitor the adults to provide a forecast and the good news is that as of today, a little over halfway through monitoring, all 99 trap sites in Manitoba are still in the low-risk category,” Gavloski says.

But that doesn’t mean you can afford to let your guard down. To scout for bertha armyworms, Gavloski recommends marking out a quarter-metre piece of field, shaking the plants, and then carefully picking through the debris on the soil to get a thorough count. “These insects are easier to count than some,” Gavloski says, “they’ll lie on the surface for you, but you do need to look under debris, clumps of soil and cracks in the soil.”

Spraying decisions for bertha armyworms are made based on an economic threshold, as such, spraying occurs when there are enough larvae that the potential yield loss outweighs the cost of controlling them. Research shows that you can expect an average yield loss of 0.058 bushels per acre for each larva per metre squared. In drought conditions, however, losses may be greater since more dropped leaves mean the larvae are likely to feed on plant pods instead.

Only a threat to crops in the larval stage, newly hatched diamondback moths burrow into leaves, eating them from the inside out. After about a week, they emerge and feed externally. They can be found feeding on leaves, buds, flowers, seed pods, stems, and occasionally the seeds themselves. You may recognise evidence of diamondback larvae by the small, irregular holes that the leave behind. If there are enough of them, they may eat entire leaves, leaving only the veins. So far this year, it has been just a few fields with economic levels, but it’s still important to scout for them in case they become a problem in your field.

When scouting for diamondback moths, Gavloski recommends shaking some plants over a tray and then counting the larvae. “If you’re removing plants, remove in a foot square area. Beat them over a surface and count the number of larvae.”

The adult moths, which won’t damage your crop, but will show up before larvae are present, are monitored by provincial specialists and agronomists in May and June using pheromone-baited traps.

The last pest that Gavloski recommends watching out for is the lygus bug, which prefers to feed on the most nitrogen-rich points of the plants, such as buds, flowers, and young seeds. While many plants can compensate for feeding on buds and flowers, they require adequate soil moisture to do so, which could be an issue in such a dry year. While the other insects we’ve mentioned have mandibles, and chew on the front tissues of plants, lygus bugs have a beak which they use to suck out sap.

“Get out in your field in later stages of flowering,” recommends Gavloski, “do sweeps with a sweep net, and see what your levels are like.”

Gavloski recommends taking 10 sweeps of at least 5 sampling sites in a field. He says you should ideally sample in the late morning or early afternoon after the dew has evaporated, when lygus bugs are active in the upper part of the canopy.

Contact your BrettYoung Regional Account Manager to take a look at your canola field with you, and learn more about what to watch out for this summer.