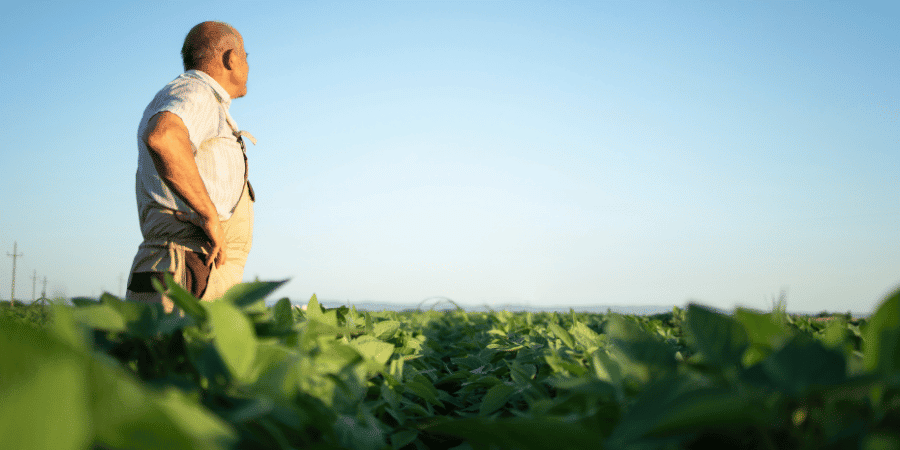 Were Soybeans Worth It?

With Jason Henderson and Allan Wilson

This hasn’t been an easy year for farmers in the Prairies. Extreme heat and record low levels of precipitation this summer have meant significantly reduced yields for most crops.

Soybean growers weren’t immune to the pressures of the long, hot summer, which had producers bracing for low yields after seeing other crops suffer during the drought.

Allan Wilson, a Seed Production Specialist with BrettYoung, says while it’s still too early to say precisely what this year’s soybean yields will be, the expectation is they’re going to be down—and possibly down significantly—in certain areas.

“Soybeans can tolerate quite a bit of heat, but they also need moisture during certain periods of time throughout the summer. We went almost two months with negligible rainfall. That meant a lot of soybean plants shut down seed production early.”

Jason Henderson, a fellow Seed Production Specialist with BrettYoung, agrees. He says the lack of moisture this summer had a significant impact on the pollination and seed set of soybean plants in most parts of the province.

“Essentially, you end up with fewer pods per plant and, in some cases, fewer seeds per pod. As the season progresses and the plants become stressed due to inadequate moisture, you don’t see pollination all the way through the season, so you don’t end up with as many late pods,” he explains.

Rain finally arrived in August, too late for most crops, but both Henderson and Wilson reported it helped some varieties of soybeans. That was particularly true for some mid- to late-season varieties planted later in the season.

“Because we ended up getting some late rain, some of the more mid- to late-seasons varieties…benefitted from that rain,” Henderson says. “It came too late for some early soybean varieties, but the rain helped many of the still-green varieties that had not yet entered dry down,” Henderson says.

Wilson advises it’s generally a good practice to plant different varieties that offer a range of maturity groups. In some years, August is dry, with early maturity varieties performing just as well as the mid- to late-season ones. This year saw late rains that longer-season varieties could take advantage of, and they are performing better.

“It just helps to spread out your risk, because you really don’t know when you’re putting the seed in the ground what the year is going to give you—you’re not risking it all on one variety,”  he cautions.

The Future of Soybeans

So, could the tough growing conditions that farmers had to contend with this past summer prompt some to eliminate soybeans from their operation going forward? Wilson says that’s not likely.

This summer’s dry conditions prompted some soybean growers to examine their farming practices and tweak them in order to better cope with the weather-related challenges they faced. Henderson says one of the most common themes he noted was a growing number of farmers who decided to examine different row spacing options or solid seeding to achieve faster ground cover and better moisture retention.

While soybeans were no more immune to the impacts of this summer’s heat and drought than most crops, Wilson says the good news is they were less affected by some of the insect pressures other crops had to contend with. Flea beetles, for example, have been a real challenge in establishing canola in recent years, but they don’t bother soybean plants.

“I think growers are going to sit down over the winter and look at the prices they can get and base their decision on an average yield during an average year,” he says. “I don’t think I’ve talked to anybody who is going to take soybeans out of their rotation. If prices stay high when compared to some other crops, [acreages] could even increase in some areas.”

Henderson agrees: “I think most growers will probably run their budgets this winter and make their determination based on how the crop compares to other competing crops such as canola,” he says. “I think they recognize what the rotational benefits to soybeans are, what the insect pressure benefits are and what the input costs are relative to other crops.”