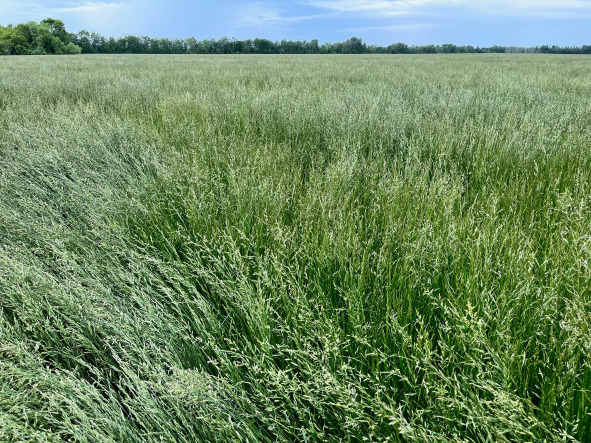 Tall fescue is a perfect turf grass for athletic fields and lawns — but it’s also a great soil reclamation tool and good for growers wanting a multi-year crop when grown for seed production.

Compared to other cool season grass crops, tall fescue is more tolerant of the variety of conditions we see in Western Canada.  It does well over a range of soil conditions and excels in challenging environments like high moisture soils, and due to its extensive root system, it is also drought and heat tolerant.  Tall fescue will tolerate saline conditions better than most annual crops too and has shown to be quite hardy in our winter climate, according to BrettYoung Seed Production Specialist Scott Davie.

Eric Mickelson has been growing tall fescue south of Prince Albert, SK with BrettYoung for four years. He’s had unproductive saline land that he didn’t know what to do with, so being a BrettYoung canola grower, he asked what to do, and was told tall fescue responds well to saline soils.

“Think of it like a ball pit,” said Mickelson. “If you fill the pit with wet sand, the kids can’t move freely in it. It’s the same as plants in saline soil.”

Grass, however, can move just enough in the soil, so as it grows, it uses up the water, drying the soil, and giving other plants an opportunity to grow in it.

Tall fescue is a perennial, too, so Mickelson planted it four years ago and has replanted it once since then. Because it’s a perennial, tall fescue can be a nice option for someone wanting a multi-year crop. You seed it with a nurse crop like wheat or canola and once established, you can keep the fescue for up to 3 years, which takes the pressure off at seeding time during those additional springs.

His long-term goal with the field is to get it back into grain production. He expects he has another two years before he gets there, and while his yields with the tall fescue aren’t as high as they would be with a grain crop, he’s happy he’s at least getting a yield when he would get nothing otherwise.

Another pro to growing tall fescue, he said, is it splits up the workload at harvest. Tall fescue is ready to come off in late July/early August, which means Mickelson is done with the grass crop before he even starts his grain crops.

Bob Messinbird agrees. He’s been growing BrettYoung tall fescue by Gilbert Plains, MB for 14 years now and doesn’t plan on stopping anytime soon. The main reason he likes it is because of the early harvest.

“The field I started off on is what you’d call marginal land,” said Messinbird. “If I were to put wheat there, it has a tendency to dry out before the crop is filled, but the grass comes in earlier, finishing off by the time we get into the hot, dry part of the year.”

And by harvesting his tall fescue in late July/early August, it means he has one less crop to worry about during the busy harvest in fall.

Davie said tall fescue is not susceptible to much in the form of disease pressure. Growers occasionally have to keep an eye on their fields for army or cutworms, but they’re usually not a major concern. Turf-type tall fescue also contains endophytes which can be harmful to livestock when ingested. For this reason, growers should take care when feeding it to cattle, and he recommends testing to determine the endophyte levels. Forage type varieties, however, do not contain endophytes and provide a nice bonus added in palatable straw baled up behind the combine, as well as a regrowth green feed cut in early fall.

The first year Messinbird grew tall fescue he had the best crop he’s had to date, netting 1,500 lb. Since then, his yields have been lower, until harvest 2022, when he got his second-best crop of 1,400 lb.

“That fescue was probably on the poorest land I have and was the most profitable crop I had this year,” he said.

Establishing a tall fescue crop can be difficult, said Messinbird, and growing the grass definitely requires some extra TLC. Davie said you want to make sure you have problem weeds like quackgrass and wild oats under control. While there’s limited wild oat control options, there are many solid broadleaf herbicides at your disposal. And like most grasses, a crop of tall fescue is going to require a good amount of nitrogen applied during the year of seed production.

“You have to be willing to put extra effort into it,” said Messinbird.

And because Mickelson and Messinbird are willing to put in that extra effort, they reap the rewards off otherwise unproductive fields with BrettYoung’s tall fescue. To learn more about producing tall fescue seed with BrettYoung, reach out to your regional Seed Production Specialist.