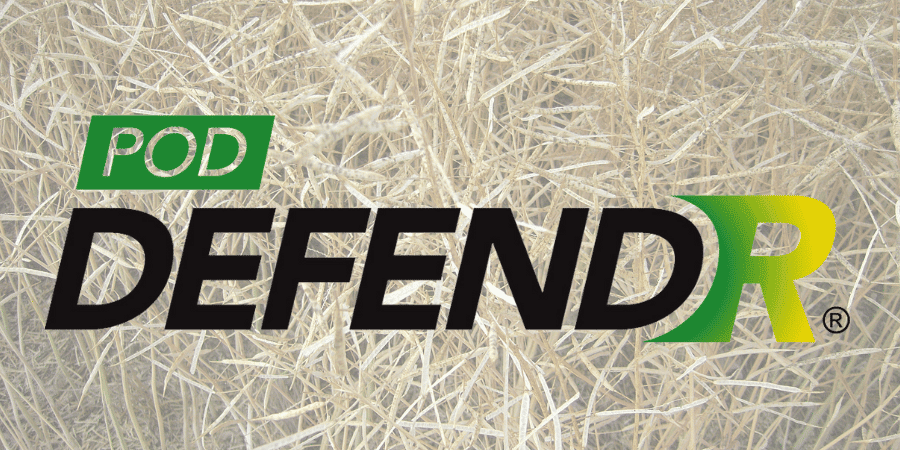 Protecting Your Pods with Pod DefendR

Pod shatter has been haunting canola growers in Western Canada for years now, causing significant losses and limiting harvest options. Luckily, there’s a way to fight back with Pod DefendR – canola with shatter-tolerant technology from BrettYoung and our breeding partner, DL Seeds.

Pod DefendR hit the market last year and has since proven to be a game-changer for BrettYoung canola growers, one of whom is calling it one of the best options out there.

Pod shatter is natural mechanism for seed dispersion and is influenced by genetics, weather, and the environment. These factors can create conditions for significant pod shatter at maturity, leaving a lot of seed — and profits — on the ground.

The introduction of pod shatter-resistant hybrids to canola growers several years ago led to a significant increase in adoption of both direct harvesting and delayed swathing of canola crops.

DL Seeds and its parent companies have researched their own solutions based on technology developed by their parent companies in Europe and what has emerged is an understanding of a complex pathway of gene interaction that controls pod valve function.

Thanks to our new pod shatter resistance trait, which delivers a dependable level of shatter tolerance, BrettYoung canola growers enjoy the flexibility of delayed swathing and straight cutting, and can worry less about suffering pod shatter losses.

Jacob Funk, who farms just outside of Roblin, Manitoba, saw this firsthand this year when he grew BY 6211TF for the first time. He said he was looking for a straight cut TruFlex® or Roundup Ready® variety to try, so Funk tested out three products with shatter claims, one of those the BrettYoung hybrid.

“The plan was to find the good straight cut Roundup Ready canola,” he said. “I got some different straight cut varieties and just kind of watched it all year.”

Up until now, Funk has only swathed Roundup Ready varieties. He said he planted three straight cut varieties his first time in case one didn’t stand well, or the pod integrity was low.

BY 6211TF stood to the test in both departments — Funk found the hybrid didn’t lean despite being tall, had a good plant count (emergence), and had the best pod shatter reduction out of the three varieties he grew.

“You see the odd shells flying from touching and combining and from the wind,” he said. “But with the BrettYoung seed you could hit her pretty hard and nothing was ever coming apart on that plant. It was definitely holding together the best.”

Funk liked the pod integrity on BrettYoung’s hybrid so much he said he wouldn’t be afraid to let it stand in a heavy wind.

How does it work?

Pod DefendR is a specific genetic trait that reduces pod tension built up at maturity and ultimately, the tendency for canola pods to split at the pod dehiscence zone (pod seam) that holds both sides of the pod (valves) together.

One of the most appealing things about Pod DefendR is that it allows for a wider swath timing window and the option to straight cut. Funk said when it comes to timing (maturity), BY 6211TF was on par with the other pod shatter resistant varieties out there.

BrettYoung’s Pod DefendR hybrids to date have been found to be extremely competitive with industry standard performance when it comes to pod shatter tolerance. It’s part of our DefendR series, an easy-to-understand approach that highlights superior harvest management and disease resistant genetics.

BrettYoung uses the DefendR designation to signal exceptional genetic tolerance to pod shatter and durable resistance to the three prominent disease complexes affecting canola: clubroot, blackleg, and sclerotinia. For growers interested, BrettYoung currently has two TruFlex® canola hybrids with the Pod DefendR feature: BY 6211TF and BY 6217TF. Pod DefendR will also be available in both the LibertyLink® and Clearfield® herbicide platforms soon.