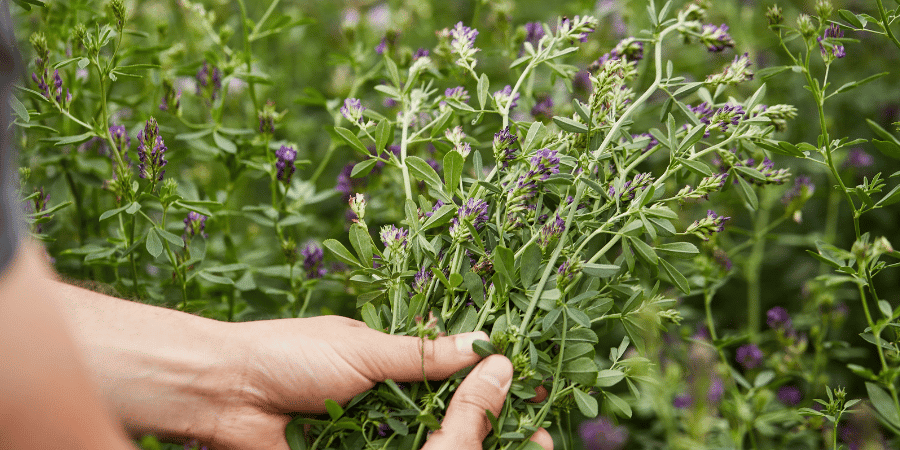 Varietal breeding is an important factor that has contributed to dramatic improvements in crop yields since the turn of the century. In modern agriculture the need to produce higher crop yields is pervasive. We have all heard the stats, “If the world is to grow enough food for the projected global population in 2050, agricultural productivity will have to rise by at least 60%, and may need to more than double” according to researchers. This and other variations of this statement often leads to a conversation involving varietal improvements, among other factors, to achieve higher yields.

In forages, the benefits of varietal breeding are equally as important; however, improvements are gradual as non-GMO breeding techniques are status quo in these species. The development time to breed, evaluate and commercialize a new variety can take around 10-15 years, which is one of the main reasons that successful forage varieties often stay successful for many years. Synthetic breeding is a marathon, not a sprint.

Improved yield is the most commonly pursued forage breeding goal – studies showing genetic yield increases in alfalfa anywhere from 0.23% to 1% per year over the last 50 years.[1] These numbers may not sound significant, but over time, these improvements translate into a meaningful yield advantage in the field. Beaver alfalfa may have been the highest yielding forage on your grandfather’s farm back in 1961 when it was first introduced. Today, six decades have passed, and the incremental benefits of breeding advancement have made this variety obsolete.

“In more recent years, we have seen the benefits of conventional forage breeding through an increased focus on less tangible characteristics such as quality, palatability, vigor, winterhardiness and disease resistance,“says Erik Dyck, Forage & Turf Product Manager with BrettYoung. “Many of these characteristics can deliver a significant advantage when used in the appropriate management system and environment.”

For example, sometimes the effects of infectious diseases can be dramatic, such as sudden stand loss in canola caused by Sclerotinia Stem Rot. Often, the effects of diseases on alfalfa can be equally devastating. Disease can cause alfalfa plants to regrow slowly following cutting resulting in a stunted stand or cause a few scattered plants to die between each cutting. Over a period of a few seasons this can result in gradual yet substantial loss in plant stand density. There are many diseases that also predispose alfalfa to winter injury. Improved resistance to diseases affecting alfalfa is becoming a larger focus in plant breeding as it will pay dividends in the field for many seasons.

The development of improved digestibility alfalfa is the next evolution of conventional breeding advancement that has led to the commercialization of a lower fiber and high protein alfalfa suited to Western Canadian dairy producers. Improvements in forage quality and milk production come from focusing on several key forage traits. Breeders focused on improving fiber digestibility and an increased rate of and extent of fiber digestion when developing Surge Hi-Gest™ alfalfa. The breeding process also selected for plants with finer stems and a leafy, dense canopy with a high concentration of leaves in the lower plant canopy. These plant traits also help improve fiber digestibility and crude protein content.

“With improved fiber digestibility and 3-5% higher crude protein, that results in 12 to 20 pounds more protein per tonne of alfalfa,” says Erik, “That translates into the potential for 2.5 or more pounds of milk per cow per day – a significant improvement in feed efficiency and milk production for dairy producers.”