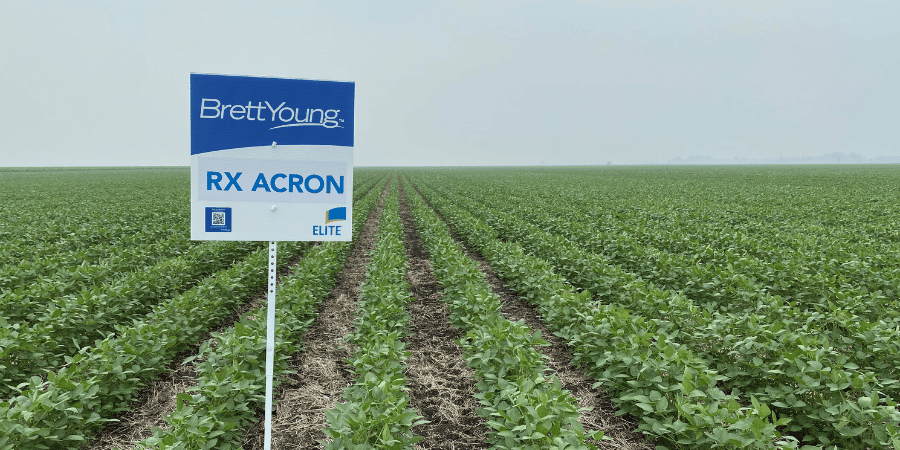 Dennis Friesen considers himself one of the lucky ones.

Friesen is a third-generation farmer who operates a family-owned farm in Lowe Farm, Manitoba, a small town of about 400 people located 10 minutes west of Morris. While many of his farmer friends suffered through a devastating growing season due to this summer’s extreme heat and dangerously low precipitation levels, Friesen was able to grow a decent crop of soybeans, canola and wheat.

“In the Lowe Farm area, the crop was pretty good or so-so at least. But a lot of my farmer friends who live north of here, their canola only did five bushels an acre and mine did 25 to 30. I feel bad for them because they did not get a crop at all really. I feel fortunate that we got a decent crop this year,” he explains.

A Silver Lining in a Difficult Season

In hindsight, Friesen says one of the best decisions he made this season was growing RX Acron an Elite soybean variety from BrettYoung.

Friesen says his decision to try Acron soybean was influenced by a recommendation about it from his local seed dealer, MB Seeds.

“What sold me on Acron was the fact that I like a tall bean. It just combines so much better,” Friesen says. “I thought it was going to be a mistake this year because it takes a lot of moisture to grow a tall bean. But there were guys who grew other varieties, shorter varieties, and theirs did worse than mine. In all honesty, I thought Acron did very good for me, especially with the conditions we had here.”

RX Acron is a SCN resistant soybean that offers a tall plant with aggressive early growth. As a 00.6RM, it excels under tough conditions.

“Surprisingly, even that one was reasonably tall,” he adds.

Although he is still finalizing his crop management plan for next year, Friesen has already decided that Acron will be part of his plans for 2022.

“Yeah, I’ve already talked to my seed dealer, and I would really like to purchase them again for next year,” he says. “I expect big things from [Acron]. I got really excited about that one quarter that hit 50 bushels. I have some videos of that field and it looks just gorgeous.”

To learn more about Acron soybeans or to get advice on whether it’s right for your fields, contact your BrettYoung Regional Account Manager.