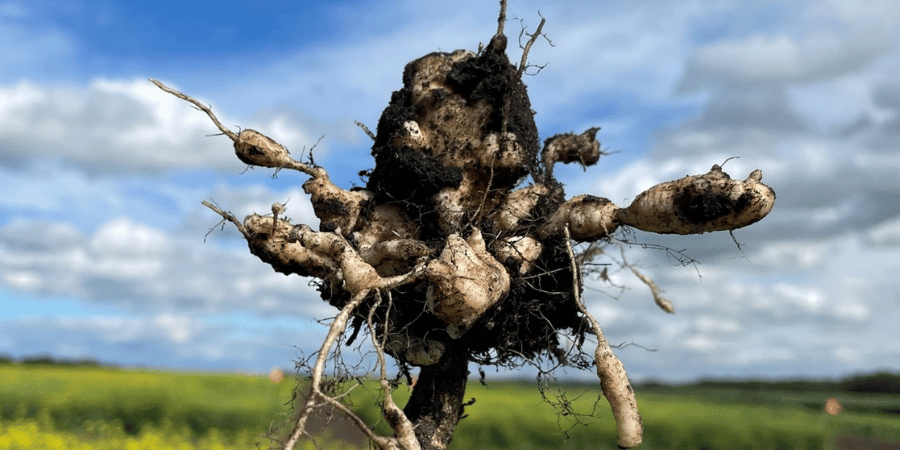 It’s been almost a two-decade long fight against clubroot, but the end is nowhere in sight. The soil-borne disease has been killing canola plants in Canada since 2003, when it was first discovered near Edmonton, Alberta. Since then, it’s spread to over 3000 fields in the province, and several additional fields in Saskatchewan and Manitoba, with the pathogen’s spores waiting to wreak havoc in more.

Clubroot causes swellings or galls to form on the roots of canola plants, ultimately causing the plant to die prematurely. It’s caused by a fungus-like protist and that seeks out brassica plant roots. Galls can release spores, which can survive in the soil for up to 20 years, then germinate to produce zoospores, which infect the root hairs of the next susceptible plant and so on.

There are currently no economical control measures to remove the pathogen from a field once it becomes infested. Curtailing the spread and reducing the severity of it, though, is possible with minimizing the risk of soil movement, using a sanitation plan, field scouting, weed control, crop rotation, patch management techniques, and the use of a clubroot resistant canola hybrid.

Glen Hawkins, Senior Agronomist and Pulse Research Manager for DL Seeds, said together, we have a “solid next-generation package” in most of our hybrids.

“At the end of the day, we’re not stopping there,” he said. “We’re always developing new genetics and new potential forms of resistance to bolster what we already have.”

Hawkins described the clubroot situation as status quo right now, with Alberta continuing to be a hotspot for the disease but noting that Manitoba is beginning to catch up. He said our first generation and next generation clubroot resistant products are doing what they’re supposed to be, with both having multi-pathotype specificity.

“The gene we insert,” he started, “won’t have just 3C or 3A — it’ll have full or partial resistance to a number of different pathotypes.”

The story of clubroot is still very much unfolding but our understanding of the disease compared to even five years ago is immensely different. The next five years is likely to be even more insightful as our breeding partner, DL Seeds, continues to be a leader in Western Canadian clubroot tolerance. DL Seeds has new clubroot tolerance genes in their pipeline and their next-generation genetics provide excellent resistance levels to the three most important pathotypes: 3H, 3D, and 3A, the first pathotypes the Canola Council of Canada and Canadian canola industry is going to focus on.

Hawkins said pathotype evolution tells us the disease is going to find ways around the resistant products, which is why DL Seeds is always continuing their research and production on the products and why they’re constantly re-evaluating genetics to make sure they have the most robust set of clubroot resistant products out there.

“I truly think that we have one of the best clubroot packages out there,” he said. “But genetics alone won’t keep the problem at bay.”

To do that, Hawkins reminds growers to have a good crop rotation plan, something he’s seen work firsthand.